Rare Earth raw materials have hit an all time high in Feb 2022.
Our website prices are in effect as long as we have inventory. Orders may be subject to price increases.
Please contact us to confirm.
Welcome visitor, you can login or create an account.
Wish List (0) My Account Cart Checkout
Same Or Next Day Shipping

Home » Magnets » Electromagnets vs. Permanent Magnets: Which One Do I Need?

Electromagnets vs. Permanent Magnets: Which One Do I Need?

Electromagnets vs. Permanent Magnets: Which One Do I Need?

How is an electromagnet different from a permanent magnet? It’s important that you know the differences in order for your operations to succeed. Read on!

It’s no secret that magnets are in nearly everything we use on a regular basis.

In this blog, we’ll take a deeper look into the differences between electromagnets and permanent magnets.

Permanent magnets are made from a material that is magnetized and creates its own persistent magnetic field.

This type of magnet always has a magnetic field and will display that magnetic and attractive behaviour at all times.

Just as the name suggests, permanent magnets consist of magnetic material whose atoms have been permanently aligned to create a persistent magnetic field.

Permanent magnets can be made of various materials including:

It’s important to note that Neodymium and Samarium Cobalt magnets are also classified as Rare Earth magnets, which means that they have superior holding strength in comparison to its physical size.

As indicated by its name, an electromagnet operates and is dependent on electricity.

An electromagnet is a type of magnet whose magnetic field is created by the flow of an electric current.

The magnetic force in electromagnets is activated when electricity is turned on, and stops as soon as the electrical current is disconnected.

This type of magnet is made from a coil of wire, which acts as a magnet when an electric current passes through it. Oftentimes, an electromagnet is made stronger by wrapping it around a core of material like steel, which enhances the magnetic field produced by the coil.

Electromagnets offer the advantages of controlled holding power, and through the application of controlled DC electrical current, they have the ability to attract and hold ferrous materials with varying degrees of force.

What Are The Differences Between Electromagnets and Permanent Magnets? 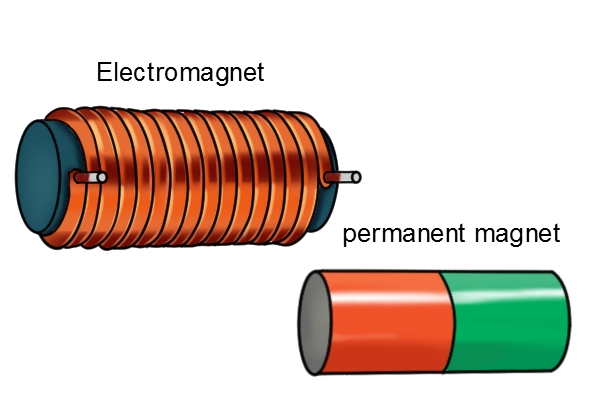 The two major differences between electromagnets and permanent magnets are:

With very few exceptions, such as exceeding maximum operating temperatures, permanent magnets remain magnetized constantly, while electromagnets are reliant on electrical currents for the strength of their magnetic properties.

The magnetic strength of permanent magnets depends on the overall material, size, and shape of the magnet itself, but once that level of magnetization is determined, it does not change.

Electromagnets, on the other hand, are highly dependent on the electrical current supplied. Meaning, electromagnets can provide multiple magnetic strengths.

Ultimately, the choice is up to you regarding which magnet you decide to go with.

Whether you choose electromagnets or permanent magnets for your application, be sure you fully understand the pros and cons of each.

If you need help deciding which magnet is best for you, give us a call. One of our experts will be more than happy to assist!